A good field which included 42 pairs from visiting clubs played the 2019 RNP Homes Temuka 2000, one of the premier golf events in the Aorangi Golf calendar.  The course was in excellent condition but the weather on Saturday and Sunday proved challenging with temperatures reaching 25C plus in the afternoons.

Players from Temuka if club not added in brackets.

In the women’s grade after the Saturday four-ball Willi Powell and Brenda Davies led with Shelley Flintoff and Jacqui Fisher (both Pleasant Point) on 61, from  Judith Rees and Michelle Bower (both Pleasant Point) on 62 and Jo Goodhew and Kathryn Baker (both Timaru) on 63. Seven other pairs were on 64 to 66 so in position to challenge on the 2nd day.

In the men’s competition Richie Preston and Ants Etti shot a sensational fourball score of 53 and led from two pairs on 57, Regan Joyce and Grant Phillips (Twizel) & Willy Twaddle and Colin Tarrant and then from another seven pairs on 59 and 13 pairs on 60 to 62 so plenty of challengers for the title on the  Sunday.

The individual nett round on Sunday saw changes on the men’s leader-board but the top 10 all came from the group with a Saturday score of 62 or less. Nathan and John O’Connell  (both Glenti) added netts of 71 and an outstanding 58 (70 gross) to their 61 and a 190 total to win the first prize and the Temuka Pottery plates by 8 shots.  Steve Talbot and Chris Kooman were 2nd on 198 and 3 pairs followed on 199, Alan Ewington & Colin Attridge, Brent Foxcroft & Wayne Hobbs and John Donoghue & Reon O’Reilly (Mongolia). Last years runner’s up Graeme Mehlhopt and Steve Stewart were next on 200. The Saturday leaders could not repeat their first day form and finished mid field and out of the prize list on 213.

In the women’s grade one of the first day leaders Willi Powell and Brenda Davies maintained their top of the table form and added netts 73 and 72 for 206  however Liz Attridge & Christine Cornelius (Twizel) came from a Saturday shots back and a 67 nett to add individual netts of an outstanding 62 and 73 for a 202 total which saw them win first prize and the Temuka Pottery plates by 4 shots. Other good performers from day 1, Michelle Bower & Judith Rees were 3rd on 208 followed by Jo Goodhew & Kathryn Baker on 209. The first day co leaders Flintoff & Fisher could not continue their form and finished mid field on 222. 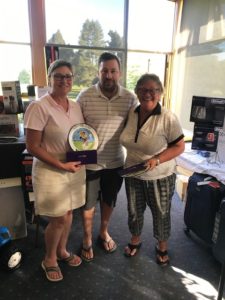